Message Sent
Thank you for your inquiry. We will respond to you as soon as possible.

One Gift, A Lifetime Investment

Meet your personal financial goals while making a difference for our future.

You are at: Planned Giving > Gift Options > Donor Stories 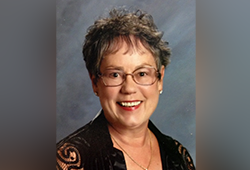 Carol Barr, BS Dental Hygiene, '69 met her late husband William Patrick Barr, BS in Pharmacy, '69 while they were both attending Idaho State University. Interesting enough, Carol's maiden name was also her married name so they met in the registration line.

After graduation they worked 40 years in their professions and were very successful. Though living in northern California they stayed active, visiting ISU after graduation and showing their children the campus on vacations. They also faithfully attended gatherings in Sacramento for Pharmacy Alumni and Phi Delta Chi Fraternity.

Carol remembers giving back to Idaho State early, as she and Pat were donors to Holt Arena while it was still being constructed. Through the years they continued to stay involved. Carol and Pat were married for over 41 years until Pat passed away in 2011.

After Pat died Carol thought that because they had attended the same university that it would be a good idea to also have an endowment fund in her name setup through a bequest for the Dental Hygiene Department. "At ISU my education was so specialized and we were all so lucky to have three instructors for ten students. Every procedure was closely monitored and I am forever grateful for that experience."

"I enjoy giving to ISU because it is small enough that I think my gift in whatever amount it might be will be recognized and valued. With other huge schools there are so many alumni and so many generations that no one actually knows the family story of each gift."

Carol appreciated the culture that she and Pat found at Idaho State. "The truthfulness and authenticity of the campus really shines through and the sharing of resources and knowledge. The strength of any organization is its fairness and taking care of one another in times of need. The whole community of Pocatello has a loving mindset like being part of a family atmosphere."

Carol likes to give gifts to charities when she think they will be appreciated and used in the manner designated by her. "At ISU I feel that the gifts won't go to anyone who isn't mentioned in the agreement for the gift."

"I would like our family legacy to show someone, someplace, sometime that Pat and I met and graduated from Idaho State University in Pharmacy and Dental Hygiene. We appreciated our education and want future generations to benefit from our gift."